After abandoning the approach taken in The Elements of Law, Hobbes used De Cive to establish his new civil science on a materialist basis, thus challenging the dualist foundations of Descartes’s mechanical philosophy. This shift is analysed here with close reference to the discontinuity in Hobbes’s use of the concepts of ‘laws of nature’ and ‘right reason’. The article argues that, the descriptive nature of mechanics notwithstanding, De Cive’s foundational aim left civil science with the normative task of producing its own material conditions of possibility until, in Leviathan, Hobbes went as far as reconsidering Plato’s philosophical commitment to political pedagogy.

New Book: Hobbes Against Friendship: The Modern Marginalisation of an Ancient Political Concept 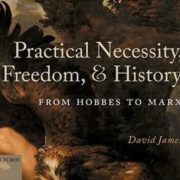