European Hobbes Society
You are here: Home / Features / New book: Hobbes’s On the Citizen: A Critical Guide, edited by Douglass &... 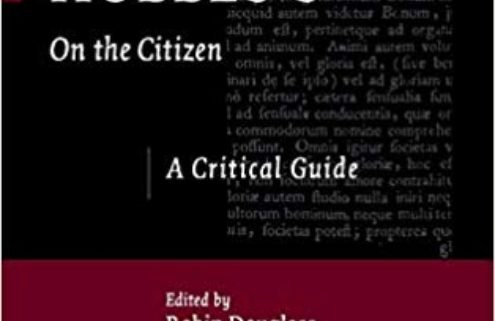 This is the first book-length study in English of Thomas Hobbes’s On the Citizen. It aims to show that On the Citizen is a valuable and distinctive philosophical work in its own right, and not merely a stepping-stone toward the more famous Leviathan. The volume comprises twelve original essays, written by leading Hobbes scholars, which explore the most important themes of the text: Hobbes’s accounts of human nature, moral motivation, and political obligation; his theories of property, sovereignty, and the state; and, finally, his ideas on the relation between secular and ecclesiastical authority, and the politics behind his religious ideas. Taken together, the essays bring to light many distinctive aspects of Hobbes’s thought that are often concealed by the prevailing focus on Leviathan, making for a richer and more nuanced picture of his moral, legal, and political philosophy.

‘Introduction’, Robin Douglass and Johan Olsthoorn
1. ‘Excavating On the Citizen’, Deborah Baumgold and Ryan Harding
2. ‘Hobbes and Aristotle on the foundation of political science’, Nicholas Gooding and Kinch Hoekstra
3. ‘All the mind’s pleasure: glory, self-admiration, and moral motivation in On the Citizen and Leviathan’, S. A. Lloyd
4. ‘The right of nature and political disobedience: Hobbes’s puzzling thought experiment’, Susanne Sreedhar
5. ‘Motivation, reason, and the good in On the Citizen’, Michael LeBuffe
6. ‘Property and despotic sovereignty’, Laurens van Apeldoorn
7. ‘Sovereignty and dominium: the foundations of Hobbesian statehood’, Daniel Lee
8. ‘Corporate persons without authorization’, Michael J. Green
9. ‘Hobbes on love and fear of God’, Thomas Holden
10. ‘’A rhapsody of heresies’: the scriptural politics of On the Citizen’, Alison McQueen
11. ‘On the Citizen and church-state relations’, Johann Sommerville
12. ‘Sovereign-making and biblical covenants in On the Citizen’, A. P. Martinich

New article: ‘From soul to mind in Hobbes’s The Elements of Law’, by Alexandra...

Symposium on Hobbes’s Kingdom of Light, by Devin Stauffer
Scroll to top