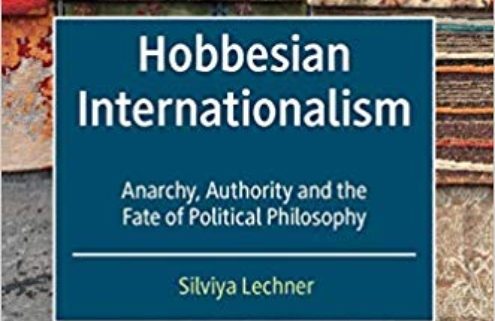 This online colloquium has been established to discuss Silviya Lechner’s recent book, Hobbesian Internationalism: Anarchy, Authority and the Fate of Political Philosophy. We began with an introduction to the text by Dr Lechner. We now have a response from W. Julian Korab-Karpowicz, which will be followed by responses from Chiayu Chou and Oliver Eberl, and finally a reply by Silviya Lechner. Many thanks to Palgrave Macmillan for supporting this colloquium.

It is often observed that in the environment of globalization, nation-states are increasingly affected by decisions over which they have little control. This is a result of the growing involvement in global politics of so many non-state actors, especially multinational corporations and non-governmental organizations.[1] If we understand freedom not merely in the Hobbesian sense as the ‘absence of restraint’, but rather in the Lockean terms as our ‘power to act or forbear acting’, [2] according to one’s choice, then it is right to say that once states are exposed to global forces, the crucial form of their freedom is being threatened, because those forces ‘affect the choices, life styles, and opportunities of those living inside their borders’ (169).[3] Can we then agree with Silviya Lechner, that Hobbes should be interpreted as ‘a theorist of freedom and rights’ (181), and particularly as a defender of the sovereign state against the supranational forces of globalization?

Let me examine some aspects of Hobbes’ political philosophy by following Lechner’s insights. As she claims, its fundamental categories are anarchy (state of nature) and authority (the state). The state of nature does not merely mean for Hobbes a primitive condition of life. Rather, it is the situation of anarchy, understood etymologically as absence of government. This may refer to either pre-political times, in which the state has not yet been established, or to a situation when, due to civil war or other domestic turmoil, a government loses its effective control over its citizens.[4] Further, the state of nature, in which human beings live when a public authority is absent, is seen by him as a state of war—and ‘such a war as is of every man against every man’.[5] He derives his notion of the state of war from his views of both human nature (egoistic) and the condition in which individuals exist (anarchy). The core of his argument is that the egoistic passions by which human beings are driven and an environment of anarchy in which they are placed both diminish the possibility of their cooperation and hence lead to their endless conflict.

This Hobbesian view of human beings has both domestic and international implications. In the view of classical political philosophy, which has its origin in the writings of Plato and Aristotle, human beings are naturally social. They can be egoistic, but they can also develop virtues and thus control their egoism by reason and hence can work for the benefit of others, even at the expense of their own benefit. The ability to rationally deliberate about what is beneficial and what is harmful, about what is just and what is unjust, is what distinguishes humans from other animals. Therefore, for classical political thinkers, human beings are both rational and moral agents, naturally capable of distinguishing between right and wrong, and of making moral choices. With great skill and considerable force Hobbes attacks this classical view.[6] He denies that human beings have a natural desire for society. He claims that when they associate, it is solely for the sake of some mutual advantage. He also denies that there is any morality in the state of nature. The notions of justice or injustice have no application here.[7] His human beings, extremely individualistic rather than moral or social, are subject to ‘a perpetual and restless desire of power after power, that ceases only in death’.[8] They struggle for power.

There are several implications that can be derived from these assumptions. First, since human beings are egoistic and antisocial, and cannot be improved by cultivating virtues and thus live peacefully with each other, they can be brought to peace only by coercion. For both Plato and Aristotle, politics is not about power or domination; it is rather about human flourishing or self-realization, which is expressed in the Aristotelian notion of a good life. But for Hobbes and his modern followers, politics is reduced to keeping, demonstrating or increasing power, and to applying different socio-techniques to be able to rule human egoists efficiently. The state that emerges as a result of his social contract, is, as Lechner rightly observes, ‘a system of coercive rules, laws’ (29), by which moral rules are also dictated. It is not the classical ideal of a political community aiming at a good life, an arena where the good of every person is discerned, developed and instantiated by the art of prudent ruling. The Hobbesian state, pictured as the awesome figure of the monstrous Leviathan, is all powerful. Absolute and unified sovereignty is for him the only practical alternative to dangerous anarchy.

As a result of such a conception of the state, citizens’ traditional class distinctions, and their ancient dignities, liberties, and privileges are removed. They all become equalized and their liberty lies only in those things that the sovereign has not forbidden. What Hobbes considered indispensable to sovereign power can be summed up as complete control over militia, money, and mind. It is, in particular, the control over mind—i.e., education—that is crucial for him. ‘Common people’s minds … are like clean paper, fit to receive whatsoever by public authority shall be imprinted in them’.[9] They can therefore easily be subjected to the Hobbesian program of indoctrination. Since the teaching of sound political doctrine is essential for the preservation of peace, the sovereign decides what should be taught at schools and universities. The classics and all forms of traditional theology must be abandoned as potential sources of intellectual ferment and sedition.[10] The key is to ensure that people are instructed in ‘their duty to the sovereign power’.[11] Moreover, the sovereign has the right of censorship and it is his task to examine all books before publication. He also presides over the church and resolves all controversies in religion, controlling thus not only the words and deeds of his subjects, but also their consciences.[12]

While Hobbes is primarily concerned with the relations between individuals and the state, he has nonetheless made a substantial impact on the study of international relations. International politics, like all politics, is for him rooted in his concept of egoistic and power-seeking human nature. Once states are established, individual drive for power becomes the basis for the states’ behaviour, which manifests itself in their efforts to dominate other states and peoples. States, ‘for their own security’, writes Hobbes, ‘enlarge their dominions upon all pretences of danger and fear of invasion or assistance that may be given to invaders, [and] endeavour as much as they can, to subdue and weaken their neighbours’.[13] Accordingly, as it would be later for the realist Hans Morgenthau, who was deeply influenced by Hobbes and adopted a similar view of human nature, the quest and struggle for power lie at the core of the Hobbesian vision of relations among states. Further, as it would be later for the neo-realist Kenneth Waltz, international anarchy (the very fact that sovereign states are not subject to any common sovereign) is for Hobbes the defining element of international relations. In such an anarchic environment, in which other states might use force at any time, each state is responsible for its own survival and must be prepared to defend itself.

By subjecting themselves to a sovereign, individuals escape the war of all against all which Hobbes associates with the state of nature; however, this war continues to dominate relations among states. This does not mean that states are always fighting, but rather that they have a disposition to fight.[14] The achievement of domestic security through creating a state is then paralleled by a condition of inter-state insecurity. One can argue that if Hobbes were fully consistent, he would agree with the notion that, to escape this condition, states should also enter into a contract and submit themselves to a world sovereign. Although the idea of a world state would find support among some realists, this was not a position taken by Hobbes himself. He does not propose that a social contract between nations be implemented to bring international anarchy to an end. This is because, as Hedley Bull later observed, the condition of insecurity in which states are placed does not necessarily lead to insecurity for individuals. As long as an armed conflict or other type of hostility between states does not actually break out, those living inside their borders, can feel relatively secure. In other words, although states may regard each other with suspicion and be ready for war, the lives of the people who live in them are not necessarily ‘solitary, poor, nasty, brutish, and short’.[15]

The denial of the existence of universal moral principles in the relations among states brings Hobbes close to the Machiavellians and the followers of the doctrine of raison d’état. Since for him law is the command of the government,[16] states—all of which are sovereign and have no super-sovereign above them—are not subject to supranational legal or moral rules, except those to which they give consent and regard as their own. Further, they all have a basic natural right to do whatever they believe is necessary to preserve themselves. The right to self-preservation is possessed by sovereign states in just the same way as by individuals in the state of nature. Indeed, ‘every sovereign hath the same right, in procuring the safety of his people, that any particular man can have, in procuring the safety of his own body’.[17] In Hobbes one can thus find a powerful argument in the defence of the sovereign state against the supranational forces of globalization. However, what separates Hobbes from Machiavellian realpolitik and associates him more with classical realism is his insistence on the defensive character of foreign policy. We do not find in the Leviathan any glorification of war. As he repeatedly reminds us, his overriding concern is that both domestic and international peace be secured. Moreover, his political theory does not put forward the invitation to do whatever may be advantageous for the state. His normative approach to international relations is prudential and pacific and this, as Silviya Lechner rightly notes, may link him to the international ideas of Immanuel Kant. Sovereign states, like individuals, should be disposed towards peace, which is commended by reason.

[6]  See W. Julian Korab-Karpowicz, ‘Hobbes: The Beginning of Modernity’, in his On the History of Political Philosophy: Great Political Thinkers from Thucydides to Locke (New York: Routledge, 2016), 158–83.