European Hobbes Society
You are here: Home / Discussion / Online Colloquium (4): Eggers on Hobbes and the Two Faces of Ethics 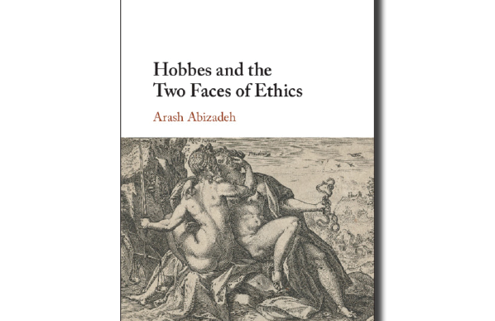 This online colloquium has been established to discuss Arash Abizadeh’s recent book, Hobbes and Two Faces of Ethics. We began with an introduction to the text by Professor Abizadeh, followed by responses from Sandra Field and Michael LeBuffe. We now have a response from Daniel Eggers (Köln), and will conclude with a reply by Arash Abizadeh next week. Many thanks to Cambridge University Press for supporting this colloquium.

One of the main ideas running through Abizadeh’s impressive book, Hobbes and the Two Faces of Ethics, is the idea that Hobbes’s doctrine of the laws of nature and his theory of contractual agreements are largely independent of one another and that agreements give rise to strict moral obligations that can neither be reduced to nor be derived from the purely prudential obligation towards the laws of nature.

To be sure, neither of these two claims is new. They have previously been defended, for instance, by D. D. Raphael and by Bernd Ludwig whose book Die Wiederentdeckung des Epikureischen Naturrechtes provides their most systematic and comprehensive defence. Yet, Abizadeh clearly goes beyond these earlier discussions and arguably improves upon them.

Firstly, Abizadeh does not forward the evolutionary reading defended by Ludwig according to which the independence of the two elements of Hobbes’s overall system is only achieved in Leviathan.

Secondly, and again unlike Ludwig, Abizadeh does not go as far as to claim that the laws of nature are not obligatory at all—and therefore does not have a similar problem with the fact that Hobbes explicitly and repeatedly describes the laws of nature in these terms, both in the earlier works and Leviathan.

Thirdly, Abizadeh locates the relevant claims within the context of some broader conceptual distinctions informed by modern metaethics. According to Abizadeh, Hobbes distinguishes between two different spheres of normativity: normativity in the ‘attributability sense’ and normativity in the ‘accountability sense’. While the former only requires that one can legitimately be criticized for one’s behaviour, as is already the case when one behaves imprudently, the second sense presupposes an interpersonal practice of assuming a second-person standpoint and holding one another accountable. Corresponding to this latter distinction is a distinction between two different types of normative reasons: eudaimonistic reasons of the good on the one hand and genuinely moral reasons of the right on the other.

Fourthly, Abizadeh introduces additional evidence for this supposed ‘chasm’ in Hobbes’s theory. Though some of his key evidence is already drawn upon by Raphael or Ludwig (such as Hobbes’s ‘official definition’ of obligation (L 14.65), his claim that there is “no obligation on any man, which ariseth not from some Act of his own” (L 21.11) and Leviathan’s table of the sciences in which “ETHIQUES” and “The Science of JUST and UNJUST” appear as separate enterprises), Abizadeh also appeals to Hobbes’s distinction between a narrow and a broad sense of ‘sin’ (peccatum), his opposition of counsel and command and his claim that the laws of nature fail to qualify as proper laws.

Fifthly, Abizadeh ultimately infers from his analysis a specific claim about Hobbes’s place in the history of moral and political philosophy. According to Abizadeh, Hobbes revolutionizes ethical theory by transforming the traditional notions of obligation and natural law, and their mutual relation. As a result, Hobbes’s theory is viewed by him as marking a watershed in the history of both normative ethics and metaethics.

There can be no doubt, then, about the originality of Abizadeh’s way of articulating and defending the two ideas under consideration. This is not to say, however, that his discussion does not give rise to some of the same worries that are raised by Raphael’s and Ludwig’s interpretations.

For one thing, though Abizadeh may not go as far as claiming that the laws of nature impose no kind of obligation whatsoever, he does emphasize that only the obligation arising from agreements is ‘true’ obligation, and the question is: what entitles us to pay such disregard to Hobbes’s own repeated application of the term? The strongest support seems to be provided by the passage from the chapter ‘The Liberty of Subjects’ already referred to above. Yet, if we read this passage in the way Abizadeh suggests, then Hobbes’s claim is simply incompatible with his own use of the term and many of his relevant statements. However, if we read it in a way compatible with this use—for example, by taking the statement to refer, more narrowly, to ‘The Obligation of Subjects’—they provide no support for denying that the obligation towards the laws of nature is proper obligation, too.

Similar considerations apply to Hobbes’s ‘official definition’ of obligation. That the passage has a definitory nature is hard to deny. However, the concession that large parts of Hobbes’s discussion of obligation are in contradiction with his own ‘official definition’ of the term is by no means a tempting one. Moreover, there are other examples where definitory statements provided by Hobbes do not have the comprehensive application they intuitively seem to have, as with Hobbes’s definition of liberty as the absence of external impediments which is inapplicable to the liberty constituting the right of nature. Rather than taking Hobbes’s statement to mean that the obligation towards the laws of nature is not ‘really’ obligation, therefore, we should perhaps better take it to mean that it is importantly different from the one arising from contractual agreements.

It is important to emphasize that this view does not yet commit us to the interpretive claim Abizadeh ultimately defends. According to Abizadeh, the obligations are not only different, they are of an entirely different kind. What distinguishes them is that they do not have the same normative status: while the obligation towards the laws of nature is purely prudential, the obligation generated by agreements is entirely independent of the negative consequences that might redound to the agent.

Yet, in my opinion, the textual evidence cited by Abizadeh does not sufficiently support this specific claim. For example, the fact that obligations arising from agreements are directed obligations, i.e. obligations in virtue of which I specifically owe something to someone, is fully compatible with the idea that their normative authority ultimately derives from prudential considerations. Likewise, Hobbes’s distinction between the broad and narrow senses of peccatum and his distinction between counsel and command are entirely neutral with regard to the question of what grounds our obligation towards contractual agreements. The same applies to the related claim that the laws of nature are not properly laws. The laws of nature are not properly laws because they do not have a law-giver (unless we conceive of them as expressions of God’s will). However, the question of whether the laws of nature express the will of someone with the authority to make laws and command certain behavior is neither here nor there with regard to the question of whether the normative status of the obligation towards these laws differs from the normative status of contractual obligations.

This leaves Abizadeh’s more explicit arguments on why the obligation towards contractual agreements is neither reducible to nor derivable from the prudential obligation towards the laws of nature, which are provided in chapter 6.2. In discussing the first point, Abizadeh rejects S. A. Lloyd’s ‘reciprocity interpretation’ of the laws of nature. With regard to the issue under consideration, however, this rejection does not have any real import since the question thereby being answered is not whether the obligations towards contractual agreements might not really be prudential, but the opposite question of whether the obligation towards the laws of nature might not really be non-prudential. Similarly, the way in which Abizadeh tackles the second issue, namely by distinguishing between the prudential reasons we have for assuming the second-person standpoint and the properties in virtue of which we have the normative power to take on contractual obligations, does not suffice to show that there must be such a thing as strictly moral, non-prudential obligation in Hobbes. For all Abizadeh tells us, the interpersonal practice of assuming a second-person standpoint, from which our directed obligations are said to emerge, might only be needed for determining the content and scope of our directed obligations, without these obligations therefore acquiring a non-prudential normative status.

In my view, then, the positive evidence provided in support of Abizadeh’s reading falls short of supporting his crucial claim—even if it may show quite impressively how keen Hobbes was on discussing the normative realm created by contractual agreements in its own right. Moreover, any interpretation of Hobbes that wants to drive a wedge between the two types of obligation needs to come up with a plausible explanation for the existence of the third law of nature and for the fact that Hobbes repeatedly discusses contractual agreements from a prudential perspective, as in his famous ‘reply to the Foole’. According to Abizadeh, what explains the link between prudence and contractual obligation is that Hobbesian individuals can only ever be motivated to fulfill their strict moral obligations in virtue of prudential considerations and that the self-interest of an agent serves as a general constraint on the obligations we can possibly attract by means of contractual agreements.

In my view, this attempt of reconciling the two spheres of normativity creates further problems, if not for Abizadeh, then for Hobbes. One question is whether the above account is compatible with the principle ‘ought implies can’ to which Hobbes obviously subscribes (see also Abizadeh’s discussion of the conditions of moral responsibility in chapter 4.1). Abizadeh’s treatment suggests that the principle is respected if there is some way for individuals to act in accordance with their contractual obligations or some way for them to be motivated to act in the relevant manner. However, one might think that the principle actually requires something stronger, namely that we can fulfill our strict moral obligations as strict moral obligations and be motivated by the fact that we are obliged in this specific sense.

Furthermore, it is not clear that Abizadeh’s solution sits well with the idea of accountability in terms of which he explicates strict moral obligation. According to Hobbes, it is impossible for us not to act on our will (unless, of course, we are hindered by some external factor). This suggests that, within the Hobbesian framework, we can only hold someone accountable for his will, that is, for that which the individual was overridingly motivated to do. If we hold someone accountable for not fulfilling his contractual obligations, then, we really hold him accountable for not being sufficiently motivated to fulfill these obligations. Yet, if all that can ever motivate Hobbesian individuals are considerations of self-interest, then this means that in holding someone accountable for violating his contractual obligations, we ultimately blame him for not acquiring the appropriate self-interested motivation, that is, for not behaving prudently. However, this suggests that the position Abizadeh ascribes to Hobbes, namely a combination of a modern accountability conception of contractual obligation and a “egoist-hedonist psychology” (229), is internally unstable. In fact, something similar seems to follow from the concession that our self-interest provides a general constraint for our strict moral obligations since the resulting view suggests that, after all, the fundamental normative value of Hobbes’s theory is self-interest and that we are only ever obliged by our own good, that is, prudentially.

The least we may say of Abizadeh’s analysis, therefore, is that he tends to treat Hobbes overly charitably and keeps quiet about some serious problems that are attached to the supposed enterprise of separating reasons of the right from reasons of the good—problems that fully come to the fore in the works of later moral philosophers, most famously in the works of Immanuel Kant.

Online Colloquium (5): Reply to Critics by Abizadeh
Scroll to top