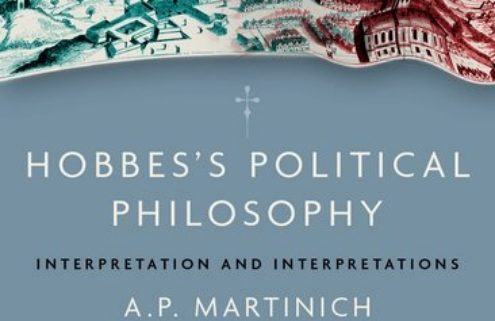 This online colloquium has been established to discuss A.P. Martinich’s recent book, Hobbes’s Political Philosophy: Interpretation and Interpretations. We began with an introduction to the text and then responses by Michael Byron and Andrew Day. We now have a response from Gabriella Slomp, which will be followed by a reply by A. P. Martinich next week. Many thanks to Oxford University Press for supporting this colloquium.

I wish to thank Robin Douglass for giving me the opportunity of commenting on A. P. Martinich’s recent book on Hobbes, which ‘extends the interpretation … presented in The Two Gods of Leviathan’ (p. 14). As the title suggests, the book has two main aims: first, to interpret Hobbes’s political philosophy; second, to reflect on the ‘nature of interpretation’ (p. 14). I will concentrate on the latter.

For Martinich, ‘interpretation is the updating of a scholar’s network of beliefs to achieve an understanding of the text. It re-establishes the epistemic equilibrium that is upset by the initial reading of a text.’ Martinich maintains that ‘sophisticated texts usually receive varying interpretations. The variety is largely due to several factors: (a) everyone’s network is unique; (b) people have different attitudes; (c) people with the same belief may be inclined to apply it differently because of (a) and (b)’ (Introduction to the Colloquium).

In what follows I will ask A. P. Martinich to expand his views on different aspects of interpretations of Hobbes. Although my questions are overlapping, I will separate and label them for ease of exposition and reference.

It is commonly acknowledged that attention to context illuminates texts; consistently, Martinich examines the historical circumstances of Hobbes’s writings and explores their impact on Hobbes’s projects (see for instance Chapter 12). As the historical and intellectual context can assist our understanding of Hobbes’s work, likewise it can shed light on the changing interests and trends of Hobbes. Indeed Martinich shows how Hobbes’s initial critics were prevented from comprehending Hobbes’s theory by their highly felt scholastic beliefs (see Chapter 6).

With the aim of asking Martinich my first question, I propose to briefly consider the heated debate about Hobbes that took place in the 1930s in Europe. According to various accounts, supporters of the rising totalitarian ideologies were looking for possible founding fathers of the total state. In particular, the year 1938 – when Adolf Hitler was named Time’s ‘Man of the Year’ – saw the publication of two works on Hobbes that impacted this debate. I am referring of course to A. E. Taylor’s The Ethical Doctrine of Hobbes (1938) and Carl Schmitt’s The Leviathan in the State Theory of Thomas Hobbes (1938) – two altogether different interpretations that shared one fundamental claim, namely that the power of Hobbes’s Leviathan is limited and therefore Hobbes cannot be regarded as the father of the total state.

While Taylor argued that Hobbes’s theory anticipated Immanuel Kant’s deontology, Schmitt pointed out that Hobbes anticipated Baruch Spinoza and liberal constitutionalism. Schmitt claimed that by examining Hobbes’s argument on ‘miracles’, one notices a ‘barely visible crack’ in his theory of absolute state sovereignty: Hobbes made a concession to man’s private domain. According to Schmitt, the individual, and not the state, is sovereign in Hobbes’s theory; the Hobbesian man decides the case of emergency, namely when obedience can be withdrawn because the state no longer provides protection.

In a nutshell, at the time of great debates about the origins of totalitarianism, Taylor (1938) and Schmitt (1938) agreed that Hobbes was in many respects the founder of liberalism – a point made also by Strauss (1936, 1952; discussed by Martinich in Chapter 8).

So, my question for Martinich is twofold: first, to what extent does Strauss’s context shed light on his interpretation of Hobbes? Second, according to Patricia Springborg (2007), during the twentieth century part 3 and 4 of Leviathan were largely neglected. Is there evidence that the rise of fundamentalism in contemporary politics has contributed to the recent increase of interest in Hobbes’s views on religion and Christianity?

From Erich Voegelin (1952) to Richard Wolin (1960), many have pointed out that the most innovative political philosophies in the Western tradition have emerged in times of crisis. In particular, Voegelin argued that during normal times there is coordination between the world of experience, the self-interpretation by society, and the dominant political philosophy. By contrast, in times of crisis, a disconnection takes place between the experience of individuals and societies on the one hand, and the ideas and concepts of political philosophy on the other: it is at these critical times that ground-breaking political theories are conceived and put forward. From a Voegelian perspective, we wouldn’t have the Leviathan (at least in its present form) if there hadn’t been an English civil war.

Indeed, in the early modern period the dominant Aristotelian philosophy could not shed light on the civil and religious wars that raged over Europe for more than a century; by contrast, the theories of unlimited state sovereignty of Bodin and Hobbes introduced concepts and ideas that made sense of people’s experiences and re-connected political theory with real life.

Whether we agree or not with Voegelin, it is nevertheless interesting to understand the impact of states of emergencies on interpretations of Hobbes: have natural and political crises driven interpreters to gain novel insights into his theory? Or have they fostered distorted readings of Hobbes? Prima facie the evidence is mixed. For instance, the works of Strauss (1936), Taylor (1938), and Schmitt (1938) appear to be biased to most contemporary readers; yet these interpretations – incorrect as they may be – had the merit of drawing attention to aspects of Hobbes that were previously overlooked – notably, the paramount importance of the individual.

Similarly, the Cold War can be said to have motivated crude realist readings of Hobbes’s international relations that are dismissed as inaccurate by many contemporary interpreters; yet these realist readings had the merit of advancing our understanding of Hobbes’s notion of security, instrumental rationality, and animus dominandi.

My second question to Martinich has to do with innovation and crisis: in addition to the discovery of new evidence, what can bring about innovation in Hobbes scholarship? Have  contemporary challenges – the war on terrorism, the demonisation of enemies, the problem of the environment, and issues of social justice and equality – brought about innovations in Hobbes scholarship in terms of focus and findings?

In the first part of the twentieth century we find interpretations of Hobbes that engage with all aspects of his philosophy – a good example is John Watkins’s Hobbes’s System of Ideas (1965). In the last thirty years, however, the focus of Hobbes scholarship has become smaller and smaller. In 1988 Robert Kraynak was among the first to draw attention to this trend in Hobbes studies; he questioned the move from ‘the heroic age’ of epic interpretations of Hobbes’s entire philosophy to the age of specialised studies of ‘aspects’, ‘perspectives’, and ‘fragments’ of Hobbes. In 1989 Robert Orr too denounced and lamented the new trend and looked for culprits. Indeed, a search started for the causes of the fragmentation of Hobbes studies: some blamed the selective approach of analytical philosophers, of game theorists, of contextualists. Others blamed external factors such as the separation of disciplines; universities’ pressure on the fast production of monographs and the twenty-page format of journal articles.

It is worth noting that, despite concentrating on Hobbes on religion, Martinich has consistently opposed the fragmentation of Hobbes’s theory. For instance, in Chapter 1 of Hobbes’s Political Philosophy Martinich reminds us that Hobbes intended to create a comprehensive science that explained everything that could be explained. He argues that the dominant interpretation of Christian doctrine could not accommodate the new science and that Hobbes made it his business ‘to construct a new theological bag to hold the old wine of doctrine’ (Introduction to the Colloquium).

On this topic, my question to Martinich has two aspects: First, how important is it, in his view, to oppose the fragmentation of Hobbes’s theory? Second, how convincing is the connection between a Christian God of love and a mechanistic interpretation of the world?

As Martinich’s new book engages with the context of primary and secondary sources; as it offers an interpretation of Hobbes’s political philosophy that is innovative and has proved to be influential; as it focuses on religion without losing sight of Hobbes’s commitment to science, I hope that my three questions about background, innovation, and fragmentation make sense and induce Martinich to tell us more about the nature of interpretation and explain further how alternative readings of Hobbes are born and developed, and why some accounts become more influential than others.

Writing in 1989, Richard Tuck pointed out that ‘so far, there is remarkably little of quality written on Hobbes’s religious ideas’ (p 238). In 1992 Martinich rectified the problem with his famous work on The Two Gods of Leviathan; the present book expands the interpretation of 1992 and is very likely to revive the interest in the theism or non-theism of Hobbes, in his methodology and contradictions, in the relationship between Hobbes’s understanding of the Christian doctrine and his theory of political obligation, and in the role of God and the ground for normativity in Hobbes’s political philosophy.

Strauss, Leo 1936 The Political Philosophy of Hobbes: Its Basis and its Genesis. Oxford: Clarendon Press

Workshop on vice, sin, and sociability in early modern moral and political ...

Online Colloquium (5): Reply to critics by Martinich
Scroll to top