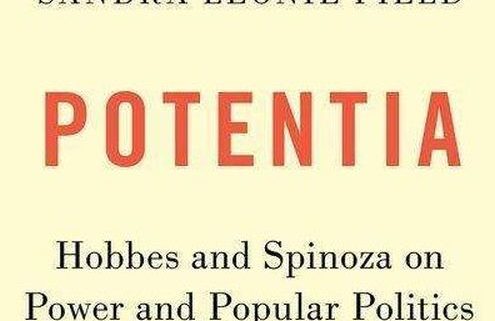 This online colloquium has been established to discuss Sandra Leonie Field’s recent book, Potentia: Hobbes and Spinoza on Power and Popular Politics. We began with an introduction to the text, followed by responses from Alissa MacMillan and Christopher Holman. We now have a response from Justin Steinberg and will finish next week with a reply by Sandra Leonie Field. Many thanks to Oxford University Press for supporting this colloquium.

Many among the mob of Trump supporters who stormed the U.S. capitol on January 6, 2021, the day on which the results of the 2020 election were to be certified by congress, conceived of themselves as representing ‘the people,’ reclaiming government from the tentacles of a ‘deep state’ elite. Of course, this self-conception was preposterous, not only because the mob manifestly represent only a minority of Americans who were seeking to overthrow the will of the majority of voters, but also because it is not clear in what sense a mass movement like this one can really be said to be popular. Wealthy elites, large corporations—including powerful media entities—and even foreign agents often play crucial roles in materially supporting such putatively ‘populist movements’ and in managing and manipulating the beliefs and affects of participants. Moreover, in the case of the capitol mob, ‘the people’ took their instructions from, and sought to do the bidding of, an egomaniacal wannabe autocrat. This raises the crucial question: what, exactly, constitutes popular power.

This is the driving question behind Sandra Leonie Field’s book Potentia. Field turns to two 17th century political theorists, Thomas Hobbes and Benedict de Spinoza, to try to extract a conception of popular power that might avoid Joseph Schumpeter’s dismal conclusion that we should abandon all pretenses to popular power. In the process, Field exposes problems with recent radical populist interpretations of Hobbes and Spinoza, showing that both of these figures better appreciated the problems with identifying populist movements and plebiscites with popular power than their ‘radical’ interpreters. The result is a rich and stimulating work on a topic—namely, power—that, while glibly bandied about in everyday political discourse, is somewhat undertheorized in contemporary political philosophy.

Since this is the European Hobbes Society, and since I have commented on the Spinoza portion of the text in another forum, I will focus here on Field’s analysis of Hobbes. Field traces Hobbes’s conception of power as it evolved over the course of his writings. She maintains that while in the early writings (e.g., Elements of Law, De Cive) Hobbes puts forth a kind of neo-scholastic conception of power [potentia] as an internal capacity, in the late works (e.g., Leviathan) he adopts a much more radical, mechanistic conception of power as concrete efficacy. There is a corresponding shift in his notion of collective power. In the early writing, only formal collectives, or those groups in which members have joined wills to form a juridical union, have authority [potestas] or power [potentia]. Informal collectives are relatively fragile, possessing no authority or power of their own. But by the time he wrote Leviathan, Hobbes came to appreciate the gap between juridical authority [potestas] and efficacy [potentia], leading him to take seriously the ways in which informal collectives can threaten theright of the sovereign, which he comes to think requires both authority [potestas]and efficacy [potentia].

While much of this account strikes me as original and compelling, I have some reservations about whether Hobbes’s changing conception of power explains as much as Field suggests. Let’s consider her case against Tuck’s “sleeping sovereign” interpretation, according to which Hobbes takes the true and ultimate sovereign to be the people, who ‘awaken’ in crucial moments to wrest power from the everyday governors and to reassert their supreme authority. Field’s response is that, in virtue of the fact that in the later writings right requires efficacy, the people cannot be said to hold sovereign right since they do not actively exercise power. But it is not obvious to me that by conceiving of potentia as causal activity Hobbes has really forsaken the notion of power as capacity. Even one who thinks that power is an activity can make meaningful, true claims about dispositions or capacities (e.g., the bomb would have destroyed the building, if it had been detonated). And Field herself notes that the later Hobbes himself allows for dispositional properties (52). That being the case, it is not evident that by adopting a conception of power as efficacy Hobbes conceptually excludes the possibility of the people possessing such dispositional power.

Nor need one be the immediate efficient cause of effects in order to exercise causal power. I can exercise power over my car even when I am not operating the gas, brake, or steering wheel (imagine that it is rolling downhill at precisely the desired speed or is on cruise control), provided that I could press the gas or brake, or move the steering wheel, if the velocity or direction were not to my liking. I see no reason, then, simply on account of his view of potentia, that the later Hobbes could not allow that the people possess ultimate sovereign right in a similar counterfactual sense: if the immediate executors were governing in deeply undesirable ways, the people could assert their power. This is not to defend Tuck’s interpretation; it is simply to suggest that the shift in Hobbes’s conception of potentia is not sufficient to rule it out.

Similarly, I am not sure how far the mature conception of potentia goes towards explaining Hobbes’s newfound appreciation of the ways in which rebel groups challenge authority. According to Field, in the earlier writings, Hobbes thought that groups have potentia only insofar as they have potestas—that is, only insofar as they are a formal collective—while in the later writings, where potentia is understood as efficacy, informal collectives can be said to exert potentia. I gather that the reason why, on Field’s account, the early Hobbes is supposed to have thought that groups cannot have potentia without having potestas is because he remains committed to a scholastic conception of powers as grounded in essences; and only genuine individuals—not mere aggregations—can be the bearers of essences. But I’m inclined to think that Hobbes was actually criticizing the scholastic conception of essences as the ground of powers when he reduces man’s nature to its powers in the Elements of Law (EL 1.4).By treating natures as nothing but powers, I take it that Hobbes is precluding the priority of essence-bearing individuals. Otherwise put, we don’t need a theory of essences and their bearers in order to determine what sorts of things have powers.

Moreover, questions of political ontology seem somewhat orthogonal to an analysis of the threat posed by informal collectives. Field herself seems to recognize this, as she puts forth another reason why the later Hobbes might have come to better appreciate the ways in which sovereignty can be challenged from below: his experience of living through the English Civil War. But even if this experience revealed the urgency of the problem, surely Hobbes’s knowledge of ancient history, not to mention his awareness of a successful revolt in the United Provinces, would have positioned him to recognize the threat even in his early works.

Finally, I want to discuss Field’s assessment of the relationship between Hobbes and Spinoza. In her introduction to this colloquium, she writes that “Spinozists tend confidently to position Hobbes as the ‘bad guy’ versus Spinoza as the ‘good guy’, or in more scholarly terms, they tend to criticize Hobbes as excessively ‘juridical’, to be saved by Spinoza’s ‘power’ approach. But in my book, I believe they are revealed to have more in common in their conception of politics than is usually granted.” At the risk of conforming to the Spinozist stereotype, I want to suggest—without presenting things in terms of heroes and villains—that there is something significant about Spinoza’s break with Hobbes that is downplayed in Field’s presentation.

It is certainly true that Spinoza has a conception of potentia—namely, potentia operandi—that is rather like the later Hobbes’s conception of power [potentia] as efficacy. But what differentiates the two political thinkers, as Spinoza makes explicit in a letter to Jarig Jelles (Ep. 50), is that Hobbes embraced a scheme of rights and obligations distinct from potentia, while Spinoza always treats right as coextensive with power. While Field herself acknowledges this (154), she treats it as relatively inconsequential. But Spinoza’s insistence that one’s natural right cannot be alienated and that the right and law of Nature “prohibits nothing except what no one desires and no one can do” (TP 2/8) is fundamental to his normative political philosophy, as it sweeps away what he sees as specious appeals to de jure authority and duty, and puts the onus on the sovereign to govern in stable and compelling ways. Hobbes, on the other hand, is fundamentally committed to the alienability of right and to a conception of natural law that obligates (at least in foro interno)outside of the state and grounds obligation within the state. This is no small difference.

Furthermore, it must be stressed that, as Field astutely observes, in addition to thenotion of potentia that Spinoza takes to be coextensive with right [potentia operandi], Spinoza has another conception of potentia [potentia agendi] that has no counterpart in Hobbes’s philosophy. It is this notion of potentia that is of particular normative import for Spinoza: humans and states alike strive to maximize their power of acting [potentia agendi], with “acting” here being taken in Spinoza’s technical sense of producing effects that can be understood through one’s nature alone.

While Field acknowledges the importance of potentia agendi, she does not explore just how distinct it is from anything in Hobbes. There are at least three respects in which the account of action or causation (what Spinoza calls “adequate causation”) on which the potentia agendi is based differs from anything that one finds in Hobbes: it depends on the explanatory role of natures, which Hobbes rejects (for more, see Steinberg, “Striving, Happiness, and the Good: Spinoza as Follower and Critic of Hobbes,” in Marcus Adams, Blackwell Companion to Hobbes [forthcoming]); it treats causation as a form of rendering intelligible, rather than regarding it in purely mechanistic, physical terms; and it is in some sense modelled on divine conception of immanent causation, a notion of which Hobbes is quite critical (see EW V.372–373). Since the striving for power in this sense of being capable of producing effects from one’s nature is the very ground of normativity in Spinoza, one cannot appreciate Spinoza’s ethical or political aims without making heavy use of this notion. Such a high-metaphysical conception of power would surely have elicited an eye roll, if not a savage critique, from Hobbes.