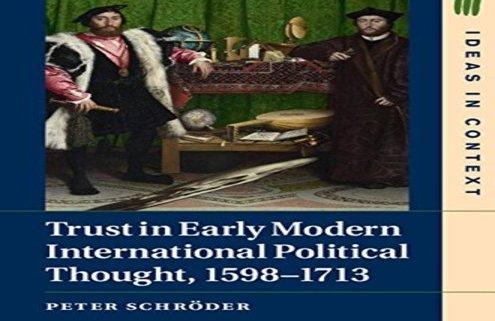 Can there ever be trust between states? This study explores the concept of trust across different and sometimes antagonistic genres of international political thought during the seventeenth century. The natural law and reason of state traditions worked on different assumptions, but they mutually influenced each other. How have these traditions influenced the different concepts and discussions of trust- building? Bringing together international political thought and international law, Schröder analyses to what extent trust can be seen as one of the foundational concepts in the theorising of interstate relations in this decisive period. Despite the ongoing search for conditions of trust between states, we are still faced with the same structural problems. This study is therefore of interest not only to specialists and students of the early modern period, but also to everyone thinking about ways of overcoming conflicts which are aggravated by a lack of mutual trust.

This is the structure of the book:

Preface; Acknowledgements; Introduction; 1. Alberico Gentili (1552–1608): new ways of posing the problem of war and interstate relations; 1.1. Confessional strife and the question of trustworthiness among European states; 1.2 A new concept of the enemy and war: trust among equals; 1.3. Pirates and other enemies hors la loi: the untrustworthy foes; 2. Plans for universal peace in Europe: the limits of a balance of power; 2.1. Sully (1559–1641) and the Grand Dessein; 2.2. Crucé (1590–1648) and the Nouveau Cynée; 3. Jus naturae et gentium: the limits of a juridical order; 3.1. Hugo Grotius (1583–1645); 3.2. Thomas Hobbes (1588–1673); 3.3. Samuel Pufendorf (1632–94); 4. The struggle for hegemony and the erosion of trust; 4.1. Leibniz (1646–1716) and his guerre des plumes against Louis XIV’s claims to hegemony; 4.2. ‘Triomphe de la Foi: religion and interstate relations after the revocation of the Edict of Nantes; 4.3. The Abbé de Saint-Pierre’s (1658–1743) project for peace and his challenge to early modern statecraft; 5. The doux commerce and interstate relations: trust and mistrust in the emerging economic discourse; Conclusion. The thing which was not; Bibliography.

New Article: “The Light of Reason”: Reading the Leviathan with “The Werckmeister...