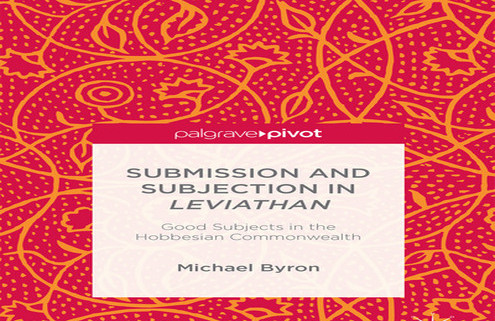 This online colloquium has been established to discuss the recent work of Michael Byron (Kent State) Submission and Subjection in Leviathan: Good Subjects in the Hobbesian Commonwealth. We began first with an introduction to the text by Professor Byron and responses by Michael Krom – here – (St Vincent State), Deborah Baumgold – here – (University of Oregon), and Johan Olsthoorn – here -(KU Leuven). We end with a reply by Professor Byron. Many thanks to Palgrave for supporting this colloquium.

I am grateful for the comments and criticism from Deborah Baumgold, Michael Krom, and Johan Olsthoorn. And I am especially grateful for this opportunity to discuss my work afforded by Joanne Paul and the European Hobbes Society.

Allow me to offer the briefest of responses to the thoughtful remarks from my colleagues. Baumgold and Krom both suggest, rightly, that I need to say more about Hobbes’s theory of religion, especially in light of what I have said about submission to God. The question Baumgold raises, “whether religious education might be a subject in its own right, separate from and even at odds with theology” opens a promising avenue of research. Krom, for his part, makes explicit the connection between Hobbes’s marginal note, “And to do all this sincerely from the heart,” and the passage in Leviathan it marks, which enjoins Christian agape. And although we need not think that sincerity is essentially or exclusively Christian, it is probably fair to say that Hobbes believes not only in the correctness of the Christian religion but in its being the measure of effectiveness of a commonwealth.

Olsthoorn’s rather longer comment engages the book more directly on a range of points. He first challenges the book’s exclusive focus on Leviathan, on the grounds that “other works in which Hobbes discusses justice and related themes are largely, or even completely, ignored.” Second, he charges that the book employs “a surprisingly limited range of Hobbesian concepts,” omitting to delve into, among other things, the natural right to all things. These defects, if that is what they are, might indeed be grave were the purpose of the book to explicate Hobbes’s theory of justice. But as the book aims instead to examine the roles that submission and subjection play in Leviathan, it is less clear that these features of the book constitute bugs.

Third, Olsthoorn complains that the book engages a “limited set of secondary sources,” which made me “overlook relevant alternative interpretive moves.” The charge of not including everything relevant is difficult to refute; I suppose I plead guilty, and beg to be excused on the grounds that my aim was not so much an exhaustive discussion of 350 years of literature, but to introduce a fresh bit of interpretation without utterly abandoning scholarly depth. Opinions regarding the balance I struck are bound to differ.

I will, however, dispute the specific example of a relevant omission: Gauthier’s reading of the laws of nature as obliging “in conscience without disallowing any particular action in practice” has less explanatory power than my interpretation. I can explain the notion that the “laws of nature are ceaselessly operative in conditions of war without being violable” in terms of the distinction between the rational theorems and the proper laws. The rational theorems apply to anyone with the power of reason; thus, the precepts of the laws of nature are in a way “ceaselessly operative.” Yet they are obligatory, and possibly violated, only where there is a “common power” to enforce them. The varieties of normativity in play explain what Hobbes says without appeal to the wooly notion of “obliging in conscience.”

Olsthoorn contends that my view treats “law and obligation as purely subjective: to be obligated by natural law is to see yourself as being obligated to God to obey it” (original emphasis). He states quite correctly that on my view the laws of nature are (or can be) obligatory prior to a (civil) sovereign’s “scriptural legislation,” and he infers that therefore anyone obligated by them in a secondary state of nature must be effectively a prophet, who has received the word of God directly. This is a non sequitur.

Anyone with reason may deduce the content of the laws of nature as rational theorems. Theists recognize those precepts as also divine commands addressed to subjects of God’s natural kingdom, and thus proper laws that obligate them. In a common- wealth, the authoritative interpretation of the precepts is the exclusive province of the sovereign. But in a state of nature, people have no authority but themselves. Flip Olsthoorn’s question: he seems to suggest that in a state of nature scripture is uninterpretable. That surely cannot be Hobbes’s view.

Olsthoorn raises an intriguing issue when he reminds us that for Hobbes even the intent to sin is a violation. “Pace Byron, it does not follow that we ought to conform our value schema to that of the sovereign.” A larger problem lurks. Hobbes does not define intention in his psychological theory, and it is not clear given his hydraulic account of motivation where intention might fit in the genesis of action. Medieval philosophers like Aquinas regard intention as a function of will, but Hobbes has flattened will into the last desire before action. Intention might be will, but that would make the concept redundant. This question deserves detailed examination, which space does not allow. In the meantime, my view is grounded in Hobbes’s motivational theory in a way that tries to explain how “sincerely from the heart” might become an apt modifier of subjects’ actions.